Thought of another post I could share with you. To recap on my last one I’m a show off with a pretty big dick, straight and never really thought about wanking with any of my mates. But other readers are sharing their dick stories and they’re interesting to read so I’m sending another post in for you guys.

I started yoga classes a couple of years ago. I don’t do it now but I thought I would try it because I have a back problem and one of my mates told me he’d read it was good for that.

Most of the others there were women and a few guys mostly in their 50’s and 60’s, but there was one other guy in his 30’s and he was hung. I’ve got a pretty big dick (which is why I like showing it off for my mates lol) but his was bigger.

It was just one of those things where you can’t help but look. Even though I’m straight I know that guys look, we all do. So this guy was a show off like me and he would just walk around the changing rooms with his dick out. I think he was probably about 7 soft. Saw him a bit chubby a few times.

After reading some of the other posts I think I might be a bit more like him than I realized. I like showing off in front of my mates and I am one of those guys who isn’t shy about my dick. I’ll sit there naked in the changing room for a while with my dick out and I guess other guys are looking the way I check out the competition.

I never thought of myself as an exhibitionist before but maybe I am?

I have another experience from when I was 19 about a guy in the toilets at a pub if you want that one too.

Sorry there’s nothing about wanking off with mates but never done that.

Thanks for your post. Don’t worry, we love posting about dick and wanking in general, male sexuality is a fascinating subject for us so your post fits right in. You raise the subject of curiosity and comparison between guys and that’s something I think a lot of readers here experience.

Sounds to me like you’re a pretty regular guy. I think most guys would admit to themselves that they check out other dicks when they get the chance even if they don’t know why. Maybe it is about comparison and seeing how you “measure up”, but some guys are just more open about these things than others are. From your last post it sounds like you’re a little bit curious, but maybe that’s a subject for another day 🙂

We’ve all got the same equipment, so I’ve personally never understood why some guys are so paranoid or desperate to hide it from other guys. I’m definitely one of those dudes who lets it all hang out in the locker room and showers and it always makes me chuckle when I see guys pulling up their boxers under a towel. I always wonder what happened to make them so timid.

Enjoyed this post? Please leave a comment below and say thanks to reader Freddie for sharing his experience. Join our NEWSLETTER for weekly updates, and why not send us your own experiences of bating with buddies, your fantasies, or just your opinions on male sexuality? Visit the CONTACT page to share your own story. 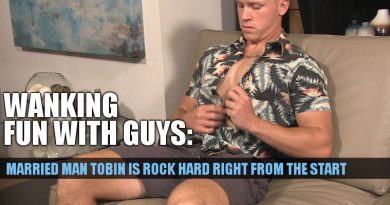 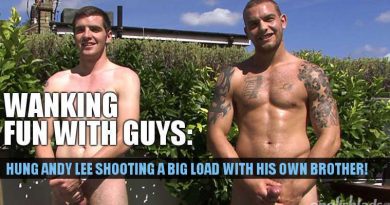 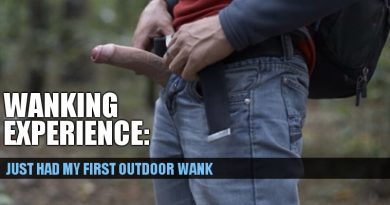 Wanked outside for the first time