I wish I had all the experiences other guys have had but mine have been limited. I’ve had curious encounters since this in the same kind of ways but it took me a while to get into it.

I was in college in the late 80s and at the time I didn’t know what cruising was or that there were guys who were into wanking off with other guys. I was 18 and had a girlfriend and I think a lot of guys that age back then were clueless about what kinds of things guys get up to.

There was a block of toilets behind the science building and I used to go there for a piss on my way between classes because it was the biggest one and most of the other toilets around only had a couple of urinals and stalls that were always too busy.

Now I’m older and wiser I understand that these toilets were where guys went cruising and looking for other guys to play with but at the time I was completely naive about it all.

I used to go in there probably four or five times a week and I saw so many hard cocks I should have worked it out but it didn’t dawn on me until years later. If I went up to the urinals when anyone else was there they were always hard and wanking it. Sometimes I would go in and there would be a few guys at the urinals and in retrospect I probably interrupted loads of curious encounters.

They must have thought I was a moron just standing there pissing while they all rubbed their dicks and showed off for each other wondering if I was there to join in, then seeing me just walking out again! lol

I got hard a few times but that was if I was going in there just hoping it was empty and I could wank one out. Other times I had a semi and once when I got my swollen chubby cock out and the guy next to me noticed he said something about it being a nice looking dick. I noticed his and he was rock hard of course but I just blushed and finished pissing and got out of there.

I did have a few wanks in there when no one else was around. Sometimes I would be in there on my own and just get the urge so I’d quickly wank off and leave.

Most of the time I just checked out the other cocks that were almost always hard. I just never put two and two together and worked out what it was all about.

I do regret missing out on all those opportunities. There was all kinds of guys in there, not even just students. Sometimes an older guy would be there showing off his hard one. I’m sure even a few of the tutors stopped by there to get some wanks and sucks when they could.

One time, for a couple of weeks, there was a road crew working nearby building some bus stops and a lay-by and a few times I went in there one of those guys would be standing there with his hard dick in his hand. Not the same guy, at least two of them were going in there and wanking off and probably doing other stuff with other guys.

I saw some impressive looking cocks back then. I didn’t even consider myself curious then but guys always look and if there’s a big pink dick being wanked and waved around right next to you you’re going to notice it. I suppose I was curious about it but just didn’t know what I was doing or what the culture was about. If I could go back to those days now I would be in there every day handling all those cocks and getting plenty of wanks from the other guys there! lol

I know it sounds stupid that I didn’t work all this out considering I was seeing stiff dicks almost every time I went in there but I really didn’t have a clue. I was just one of those guys who takes in the scenery and notices erections being wanked or guys just showing off what they had. Maybe I was just a lot more innocent than I am now but it wasn’t the kind of thing guys like me thought about at all in those days.

Thanks for reading. I had other experiences later when I worked things out a bit more so I’ll write about those eventually.

Enjoyed this post? Please leave a comment below and say thanks to reader Dixon for submitting it. Join our NEWSLETTER for weekly updates and know when a new post like this one arrives, and why not send us your own experiences of bating with buddies, your fantasies, or just your opinions on male sexuality? Visit the CONTACT page to share your own story. 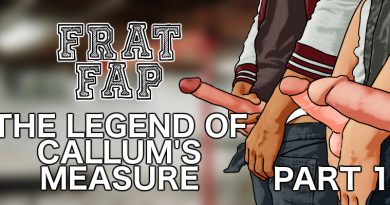 Frat Fap – The Legend Of Callum’s Measure – Part One 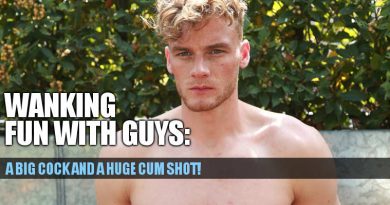 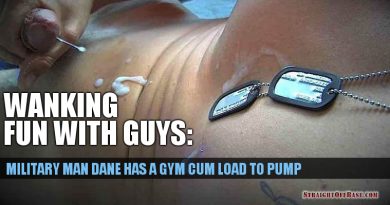 Marine Lance Corporal Dane has a boner to drain