It got started off really ages ago, from another site where someone posted about guys who work in the city, seeing if we could set up a group to chat and maybe meet. The chat got set up months ago and has been quite good fun. A few if us even met for a drink in a bar a few months back which was fun – just a drink though! We swapped pics and vids on the chat and kept the horn going which was fun, standard stuff really.

Then a couple of months ago one of the guys just decided to try and move things along a bit and just said he was going to book a cheap hotel room and see if a smallish group could get together to wank. Loads of interest (as there always is) but in the end about a dozen guys said they wanted to join.

We chatted in a separate group and made plans to meet for a drink first before heading to the hotel. By the time the day rolled around there were only 5 of us. These things have a way of dwindling down a bit! I was actually glad of that, as we’re a couple of others, starting to get a bit nervous about 12 of us heading into a hotel together and how that would seem.

We met for the drink first and chatted which was cool, all the guys were friendly. Then after an hour maybe we decided it was time and headed round the corner to the hotel.

We got up to the room and everyone was suddenly a bit nervous. I was too but I knew how I usually handled that when I met a wank bud and just said “fuck it I’m getting naked so I get rid of the nerves!” and that got everyone stripping.

We all stood in a circle by some unspoken agreement and started stroking our cocks. Everyone was hard almost straight away and it was so fucking good seeing that circle of hard dicks. We took a pic of two – of course!

After that we all made quick use of the bathroom…it had got a bit hot and sweaty and definitely smelled of spunk. Then we got dressed and that was that, really. We all headed off to the tube and went our separate ways.

It was an incredible session and one of the best things I’ve done like that. Really hope we’ll do it again. We all talked about maybe going along to the London Jack Off Club, now we’ve met each other, and I think that would be great. It was just amazing to be in a group of friendly relaxed wankers who all just love wanking as much as I do!

Enjoyed this post? Please leave a comment below and say thanks to reader Andy for submitting it. Join our NEWSLETTER for weekly updates and know when a new post like this one arrives, and why not send us your own experiences of bating with buddies, your fantasies, or just your opinions on male sexuality? Visit the CONTACT page to share your own story. 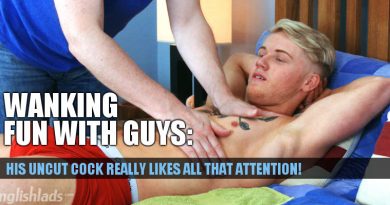 Craig Bronson gets a man wank! 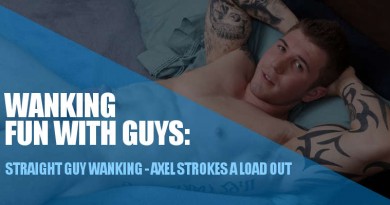 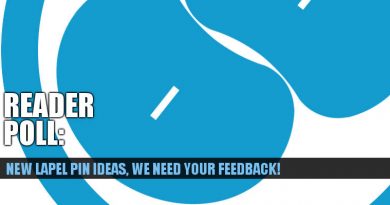