I moved in with one of my mates 2 years ago and we became wank mates pretty quick. We’ve been mates since school and when his last flat mate moved out he asked me if I wanted the room. I was 20 and really wanted to move out of where I was so I took it. I knew it would be cool living with a good mate but it’s been better than I expected.

Before that I never even thought about wanking with any of my mates. We’re we were both relaxed about stuff before I moved in and I caught him having a sneaky wank in the gym showers once but it wasn’t like we were into wanking off together or anything like that. When we were going out on the town I would sometimes go and get ready at his place so being naked around each other was normal for us. We go to the gym together too so it’s not like we never saw each other’s dicks. We were good mates so we knew what each other was packing.

When I moved in things just continued like that.

The bathroom door is basically always open. If one of us is in the shower the other one can come in and piss. That’s how we got used to catching each other having a sneaky wank in the shower.

I ain’t exactly big into this whole community thing and I don’t think I’m the kind of guy to go to a wank club or go cruising looking for other lads to wank off with but I like reading the stories from other bators and I do think about what it would feel like to wank another cock. I think if my mate wanted to swap dicks and give each other a wank I would be into it.

It’s great having a chilled out mate to wank off with.

Enjoyed this post? Please leave a comment below and say thanks to reader HandyAndy for submitting it. Join our NEWSLETTER for weekly updates and know when a new post like this one arrives, and why not send us your own experiences of bating with buddies, your fantasies, or just your opinions on male sexuality? Visit the CONTACT page to share your own story. 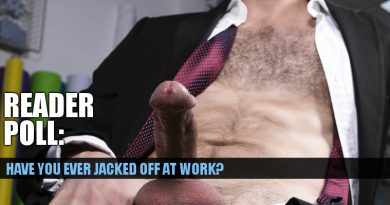 Ever shot off a load while paid to work?

3 thoughts on “From Flat Mate To Wank Mate”