If he had suggested it I probably would have, just for a laugh.

My experience isn’t really about him though, it’s about my love of big low hanging balls.

I’ve always been mostly straight. I’m one of those guys who just likes a good wank with a friend (even though I don’t have any mates to wank with now) but other than that I mostly just prefer women.

I know when my interest in nuts started. Me and the friend I used to wank with went camping with his mum and his step dad one summer and when I went to use the campsite showers on the first night his dad was in there.

Nothing dodgy happened but it was the first time I ever saw him naked and he had massive low hanging balls, and a really nice looking cock. I couldn’t stop staring at his nuts while he washed. We were talking for most of the time I was in there and I started to get hard but he didn’t say anything he just kept talking and washing and I kept trying to look at his big scrotum swinging heavy under his thick dick.

His skin was pink and so wrinkled. He trimmed his hair so I think he used to shave his balls too which made them look even more amazing.

I think he was probably about 35 and I suppose he would be considered good looking and well built but I was just amazed by his cock and balls and the way his big saggy nut sack was so wrinkled and his balls were so heavy and fat inside. My balls used to be tight and pink but in hot weather they would swing a little more, but his were so impressive!

After that I went in there again a couple of nights later when I knew he was taking another shower. I just wanted to see his big nuts again and think about what it would feel like to hold them and tug on them.

I still think about it now. I like seeing videos and photos of guys with big nuts and real low hangers and I’ve even got into ball stretching to see if I can get bigger low hangers. I think it works but I’m not into it consistently so I try it now and then and give up after a while. I think my nuts are just naturally getting lower with age so I probably don’t need to try.

So that’s my thing, big balls that swing. I don’t know how many guys there are like me out there but I’m guessing a few men enjoy big balls.

Enjoyed this post? Please leave a comment below and say thanks to reader BallBoyPhil for submitting it. Join our NEWSLETTER for weekly updates and know when a new post like this one arrives, and why not send us your own experiences of bating with buddies, your fantasies, or just your opinions on male sexuality? Visit the CONTACT page to share your own story. 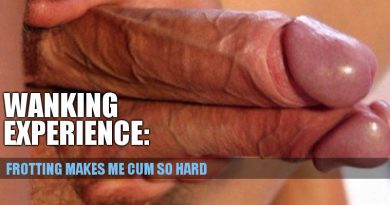 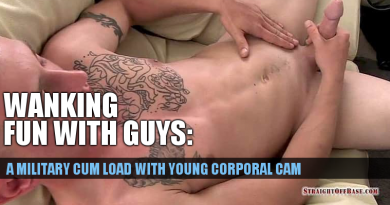 Corporal cock stroker Cam busts a load out for the viewers 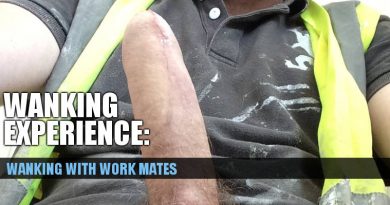 Getting our cocks out for a wank on the job