Not all guys are into toys, and I get it.

Some of you are probably down to play with a good masturbator or try some cock rings. That’s the limit for a lot of men.

Straight British guy Callum Jones was pretty open minded and easygoing from the moment he arrived. It’s probably not a surprise he’s back to pump his ass with toys while he jacks his big dick to a good load.

As you can see from his body he’s got a lot to show off. He seems to like the attention, he suggested as much in his debut wank video.

When I posted about his debut solo I mentioned how he seemed to be one of those guys who likes being naked in the gym locker room and showers. He’s only confirmed that for me since.

This straight British guy was a bit of an exhibitionist from the moment he arrived, and he was soon exploring more.

He was teamed up with fellow straight boy Lewis Grant and gay muscle jock Craig Marks. Needless to say he had a great time with those guys.

Although he refrained from sucking or fucking he got his first feel of two cocks and got some good head from both guys. He really seemed to enjoy playing with those other dicks.

This time it’s all about him again. He’s umping his tight hole with some toys and wanking his stiff dick, getting a little hand job action from the director too.

By the time he’s done he’s pumped a nice mess of straight cock cream out over himself.

One again he seems real happy with it. He’s got a big grin on his face by the time he’s finished.

I already know this won’t be the last time we see him.

I’m really hoping we see him back for some proper cock-on-cock frotting with one of the other guys. I have a list of their other boys I would love to see him rubbing dicks with.

Click here to see all his videos so far! 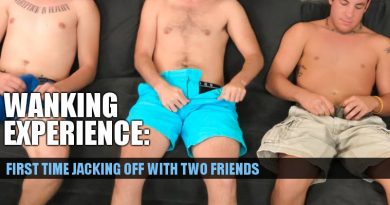 Jerked Off with Friends Before College 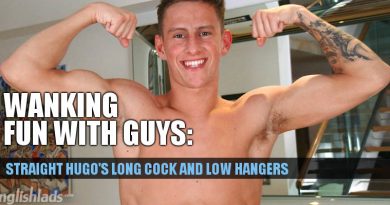 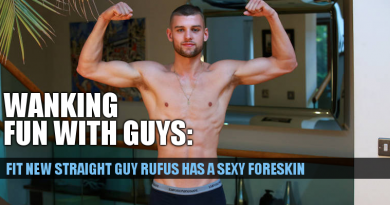