I have a lot to say about this new lad and his straight footballer dick. Prepare for a long post!

I think a lot of guys might wonder how a lad like Jamie Sherringham ends up getting his straight footballer dick out for a site like EnglishLads. It seems most of them end up being recruited by another model. A lad who enjoyed their time so much they need to brag about it.

In this case it was his brother.

They’ve both posed for some photos at the EL sister site FitYoungMen. I guess we might see his brother do the same. So far Jamie is the one to take the lead and really have a good wank on video.

In fact, we might be able to expect to see them both having a wank together in the future. Jamie talks about the comments from fans suggesting the brothers get their dicks out for a duo wank. Surprisingly he doesn’t seem fazed by the idea. He even admits that – being a footballer – there’s a lot of cock comparison going on in the showers. He’s not sure if he’s compared cocks with his brother, though.

You probably know how I feel about sporty lads and their attitudes. Lads who are used to the team showers seem a lot less bothered by the idea of getting their cock out for a wank around other lads. They’re used to seeing cocks. They’re familiar with semi hard dicks swinging. A lot of them have seen their mates with a stiffy after some pussy talk.

When Jamie confesses to having a lot of photos and videos on his phone he seems to suggest some of those might be of the lads in the footie showers. He’s not the kind of guy to post stuff like that on social media but clearly he’s the kind of lad who likes the team shower environment. I guess a lot of his mates probably have videos like that on their phones, too.

It’s just banter and games with the boys.

Jamie is definitely comfortable in his skin. Getting his straight footballer dick out and enjoying a good wank isn’t something he’s gonna shy away from.

The second we get a peek of his curved, uncut 7.5″ cock in his underwear he’s thickening up. When he pulls it out to show off his length he gets harder really quickly.

He plays with his erection, slipping his foreskin back from the damp head and giving his cock some rubs. He shows it off, swinging his dick from left to right. I can imagine him and a few of his mates doing that in the showers to show off after some talk of pussy gets them hard lol

With his cock super stiff and his balls bouncing he gets some lube added. When asked if he wants a hand to rub it in he agrees! He’s never had another guy touch that straight footballer dick before, but he’s soon enjoying having that slick lube rubbed into his warm pole.

His dick was already nicely stiff, but with another man wanking him it’s quickly rock solid and pointing straight up to the ceiling.

With footie shorts slipped on his long dick pokes out of the leg hole. He gives himself some more rubs and really gets into his bate. You can tell just how much he’s enjoying himself. I think letting another man rub his slippery cock for him has lit a bulb in his head.

We finish off with the lad in familiar surroundings. He heads to the shower, his cock thick and swinging while he cleans up. We can’t help but imagine him surrounded by his teammates and their thick and heavy dicks swinging around, too.

I know I’ve said this a few times about models we’ve seen there but I definitely think it’s true about Jamie Sherringham; he’s a BuddyBator who’s just discovered how much he likes to haul it out and share his bate with other guys.

I know some of their guys check out our posts here and read the comments. Most of them probably aren’t into the community and just want to see how popular they are.

Of all the recent new arrivals I think Jamie is the most likely to check out the BuddyBate site. I really get the impression he’s the kind of lad who’d enjoy sharing wanks with mates.

I don’t think any of us would turn down the chance to rub one out with him.

What do you think? Would you love to get your cock out and have a wank with Jamie? 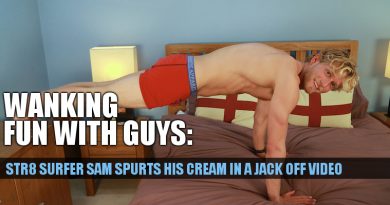 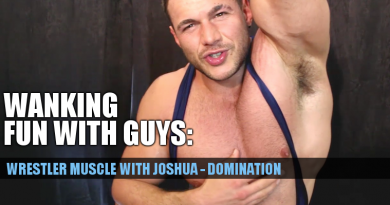 3 thoughts on “Straight footballer dick gets a hand job. Jamie Sherringham likes it!”