I love it when a new classy site comes along. Sure, there are plenty of great sites out there with loads of guys enjoying their bate, but when I saw Bodytorium.com I had to get in touch and see if we could share some of their guys.

Obviously, they’re real close buddies and although they’ve both got girlfriends they seem close enough to be pretty familiar with the occasional wank, they even suggest “no one suspects anything”, which I guess probably means they’ve enjoyed some friendly bate fun before. They were apparently constantly talking about their dicks during the shoot, comparing and making jokes, swinging their meat around and having a good laugh. With Lukas getting hard all the time it’s no surprise his buddy gets a little chubby while they’re posing and messing around in the sun.

This shoot was also supposed be all about dark-haired Andrew, but he insisted that his mate Lukas should come with him, and he was obviously eager to get his cock out with his mate. See what I mean? They’re real chilled out with each other and getting those uncut dicks out for a shoot in the woods is no big deal. That’s the kind of friendship we’d all love with a workout buddy, right?

Although sporty free-runner Andrew has just joined the army I think it’s fair to say these two boys are gonna be friends for a good long while, and we’re all jealous. You can’t tell me you wouldn’t like to work out with this duo and share a good wank after.

I hope you guys will support them and see what they’re doing, we’d love the opportunity to share more of their great guys here in the future and I’m guessing you’d like that too. Don’t forget to give them a follow on Instagram.

See hundreds of more photographs of Lukas and Andrew in full 40 Mpx resolution on Bodytorium.com

Wanking in the woods with straight jock Logan Brown, TWICE! 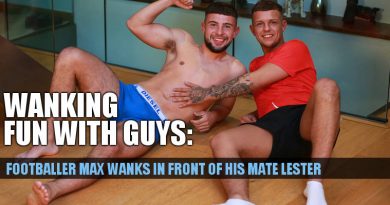 Max Lonsdale gets his cock out with his mate Lester