Chris, Kent and Aaron had always been competitive. Everyone around them knew it, they were always making absolutely everything into a sport. Even on the pitch the guys would compete against each other almost as much as the opposing team. More than a couple of times it got them into trouble with the coach, unimpressed as he was by their lack of team spirit when it came to putting the game first. It was hard for him to stay mad at them though, they were the most talented 19-year-olds he’d ever coached, he knew they had a long career ahead of them as long as they were kept on the straight and narrow.

They were at the peak of their physical fitness, three stallions of youthful energy, forever getting themselves into trouble wherever they went. The stories about the three friends followed them always. Other guys on the team had heard about their exploits, like the time Kent and Aaron double teamed a girl they picked up, or the time Kent dared Chris to streak through the background during a live TV broadcast.

Secretly, all the other guys on the team wanted to be in their gang, they were pretty jealous of the fun they had, the way they played, their incredible physiques, and even their dicks. They were always the ones swinging their meat around in the showers, making crude jokes, trying to make the other lads uncomfortable or just having a laugh.

What their team mates didn’t know was that these lads were a lot closer than they would expect.

It started in the summer of 2007, when Aaron, Kent and Chris took it upon themselves to break into a local sports club and use the facilities. They wanted to practice on a proper pitch with no one else around. They were caught by security within an hour, of course, taken to the police station and eventually rescued by their coach who did a good job of explaining to the cops how talented the three boys were and how they really didn’t mean any harm, and that he would pay for the damage to the fence the next morning.
[elbest]
He kept it all to himself, didn’t tell their parents, the police were actually pretty sympathetic.

The next day the coach called them up and told them the local council was willing to let them use the pitch and some of the facilities, as long as they promised not to cut the fence ever again.

For the next few weeks the boys went to the sports club in the evenings, practicing their skills on the pitch, but it was after, in the showers, that the fun really started.

His mates let it slide, after cracking some jokes about his dick. They’d seen it plenty of times before, all of them had of course. They’d seen each other hard too, a few times, just flashing their boners to each other in horned-up moments, just for a laugh.

This time things were a little different. The lads headed into the changing room and got naked, still chatting about Kent’s cock and how it wouldn’t be big enough to fill the girls “bucket fanny”. As their shorts came down Kent’s cock sprang up, still hard, but so was Aaron. All this talk of fucking, the pics of the girl, maybe even the sight of Kent’s hard dick, it all got him throbbing too.

Chris had a petty good semi going, his chubby cock swinging between his thighs as they joked around, Kent and Aaron calling each other queer and daring each other to grab it.

Their voices echoed around the tiled room as they walked into the showers, their cocks leading the way. Chris was now solid too, his long and curved shaft leaning upward and bouncing with every step.

To any outside observer these three would look incredible, a trio of youthful Greek statues come to life, their cocks throbbing in front of them as they joked, shoved each other, swung their erections against each other’s thighs in a playful attack on each other’s masculinity.

“Yeah, but mine’s thicker, and it’s the girth what really matters” Kent suggested. He was definitely wider than the other two, his veined shaft tapering to a more pointed pink head revealed by his retracted skin nestled behind the ridge of his glans. His friends admired his cock momentarily before Chris joined in.

“Seriously?” Chris shouted over the torrent of water from above.

“I’m in bitches!” exclaimed Aaron, shutting off his shower and grabbing his length in his fist.

The light from above bathed their defined and glistening bodies as the three stepped up side by side, their broad shoulders touching, wanking their cocks in their hands, looking at each other’s dicks as their biceps and pecs flexed and bounced in rhythm.

With the sound of the showers now silent the room was filled with the audible slap, slap, slap of cocks being rubbed and wet scrotums slapping gently against muscled thighs.

The smell of precum and sweat hung on the air around them as their pace quickened and muscles tensed, with Aaron being the first to blow.

“I’m there lads” he said breathlessly as he shoved his hips forward, paused his strokes and a leaping flash of white streaked out of his swollen head to splash over the tiled floor beneath him.

Kent’s abs and chest were rock hard as his dick throbbed and lobbed another jet of milky man juice out to join the mess he’d already made.

Chris was paying attention through the sudden increase of pleasure, he felt his arse twitch and his taint throb behind his balls as the first wave of climax flowed through him.

“Mmm, here goes” Chris murmured, looking down at his impressive shaft as it turned to steel in his paused hand and shot a volley of creamy white ball batter high into the air, splashing down five feet ahead of him.

Another wave flooded through Chris’ body as his butt cheeks clenched and his thigh muscles bulged. A second arcing splash of semen spewed from his dripping cock head, separating out to form a cluster of splashes all over the tiled floor. A third wave, a fourth, all accompanied by a big eruption of teen nut, hot and slick.

His heavy cock began to soften as he tugged the last dribbles of milk from his foreskin covered tip, his meaty shaft wet and sticky, his balls climbing back down slowly to rest in their low pink sack.

They’d save that distance shooting contest for another time.

Support our contributors by leaving a comment below, and visit the SUPPORT US page to find out how you can help keep this blog going. Why not share this post on your Tumblr blog or Twitter?

Don’t forget to sign up to the newsletter to get notifications of new stories like this one arriving on the blog. 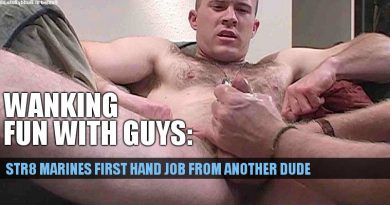 New marine Kyle gets a little help with his load 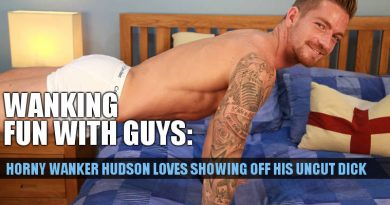 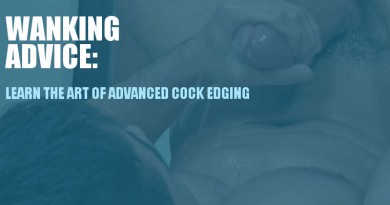 The wonderful art of cock edging