I think we all knew this was coming. After his first wank session, showing off his 8″ uncut meat and spurting out a good load for the guys, it was obvious to me that straight bator Troy Connolly would be back to explore things. This time he’s getting his first hand job from a guy and it’s clear he’s had a great time.

We get a good little workout from Troy while he’s wearing just his white boxers and socks, grabbing his bulge and playing with his meat. He’s already getting hard before his dick is even out.

If you love tan lines you’re gonna giggle when he takes his underwear off. He’s really burned himself in the sun and his cock and ass are bright white in comparison to the redness of the rest of him. Thankfully he didn’t burn his cock, but I still don’t think that would have stopped him from experiencing his first hand job from a guy.

Soon he’s getting real stiff and letting the director milk his meat from behind, which just gets him harder. He takes a seat and gets some oil applied to his tip, shaft and balls, then it’s time for the director to really have a good play with it.

He says his first hand job from a man was “very different”, but it was fun. I think it’s likely we’re gonna see him again, the only question really is which of the other guys is he gonna rub dicks with and get his first feel of another cock! 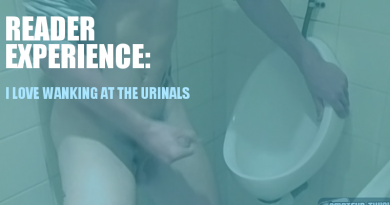 My daily wank in the mens room 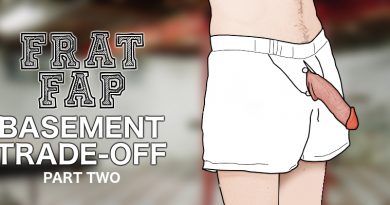