I’ve got a lot of wank experiences to share from the last twenty years but I thought I should start at the beginning and explain how I got into it all.

I was 18 in 1993. I was still living with my parents, working a new job as a plumber and playing footie at the weekends. Usually every Sunday I would take our dog Becks (my dad named him after David Beckham lol) on a long walk that took me out of the high street and down through the park by the canal. I didn’t used to go all the way into the woods but I knew there were a few paths through there so one day I just decided to make a longer walk out of it.

I used to go camping in the woods with a friend so it wasn’t like it was all new to me.

I was probably about five minutes into the woods when Becks decided to run off chasing a squirrel and I had to chase after him. When I caught up with him I found a clearing where someone had obviously been camping. There was two patches where tents had been and a dead fire in front of them.

I thought about taking some of the magazines with me but my mum was a real snooper. I don’t think I would have been able to hide them anywhere without her finding them.

I went back there the next weekend. It didn’t look like anyone had been there since I had. I got my cock out again and spent some time looking through the magazines while I enjoyed a good wank and spunked a good load out. This time I’d come prepared with a bin bag and I took two of the magazines. After a little more walking I found another clearing and chose that as my spot to hide them, ready for some future wanks.

One of the best things about all this was discovering how much fun it is to wank outdoors. I’d never wanked outside before that first time in the woods but it was an interesting experience and I was looking forward to doing it again, a lot!

My wanks there became a regular thing. Depending on my mood I would go to the main stash first and notice if there were any changes, then sometimes I would go to my own stash and have a wank there. I think it was probably a couple of months before the most interesting thing happened.

I wasn’t expecting anything to have changed, nothing had in all the times I’d been going there, but then one day I was strolling up to the main stash with my cock already out of my jeans and in my hand and I noticed movement.

Thankfully Becks wasn’t with me because he probably would have bounced right into the clearing ahead of me. I stopped and ducked down out of sight. It took me a while to get a good view but eventually I realized they were looking through the magazines and had their cocks in their hands.

I thought about backing up and leaving them to it and just walking up to where I’d put my own stolen stash but for some reason the sight of these two guys just enjoying themselves like that had me intrigued. Remember I’d never wanked with a guy so this was all a new concept to me but I knew I was interested in watching them while they talked and played with their dicks.

After about ten minutes I was kneeling on the ground with my jeans down and my cock dripping while I watched them. I didn’t think about it much, I didn’t ask myself why I was getting off on watching a couple of guys wanking but it was just horny. They just looked like average lads too. Maybe I thought they were gay or something but they didn’t *look* gay. I think I had a few biases and stereotypes in my head back then. I didn’t know any gay guys so all I had to go on were TV characters. These were just two good-looking guys, probably about twenty-five, jeans and t-shirts, stubble, Doc Marten boots. They both had their jeans down around their thighs, one of them has his cock poking out of his underwear the other was fully exposed, balls swinging while their hands rubbed their dicks.

I couldn’t hear what they were talking about but there was an occasional laugh between them.

I could have just pumped a load out and gone home but I stuck around. I didn’t know what edging was and most of my wanks were pretty quick, just ten minute rubs I guess, but now I was properly watching and wanking while they put the magazine down and turned to each other. That was the first time I’d ever seen two cocks make contact and it made my dick dribble even more.

The two guys mashed their dicks together and humped their hips, wanking both cocks at once. I was amazed. I found myself wishing I could get a closer look but even from the distance I was at I could pretty much see their uncut cocks sliding together in their hands while they rubbed each other.

I kept going back there after that expecting to see them again but I never did. I didn’t really think about why they were there at the time but after years of my own wanking adventures and meeting so many other guys who are a lot like those two were I get that they were probably just two mates who liked to go camping at the weekends to enjoy their wanks together.

I sometimes think about those guys and wonder if they’re still wank mates now. I hope they’re still meeting up at the weekends and enjoying some good wanks in the woods 🙂

Enjoyed this post? Please leave a comment below and say thanks to reader “90sWanker” for submitting it. Join our NEWSLETTER for weekly updates and know when a new post like this one arrives, and why not send us your own experiences of bating with buddies, your fantasies, or just your opinions on male sexuality? Visit the CONTACT page to share your own story. 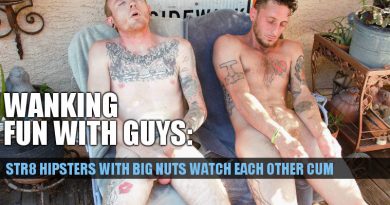 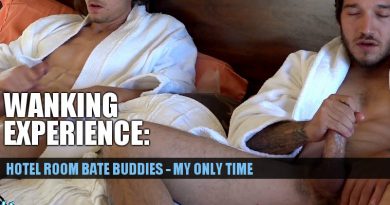 Jacking off with my buddy in a hotel room 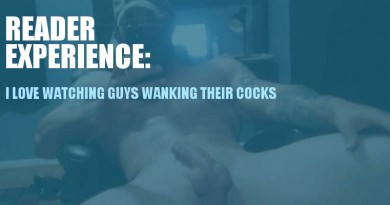