Submitted by AJ in Ohio

I was a pretty good wrestler back in my college days and I was always practicing. I had a couple of buddies I could train with but Chris was the best when it came to competition. He was much better than me and presented a real challenge. He was biggest of all the guys, a champion on the mat and something of a celebrity in the local area. It was no secret that all the girls wanted to have him, whenever there was an event coming up he would have ten invites from the hottest girls on campus.

Looking back on those days it’s surprising to me that I never worked out I was bi. Back in the 90’s guys all showered together and I was always getting hard and admiring the guys around me. Nothing was ever really said about it, maybe the occasional joke was made about one cock or another but most of the time guys just ignored the casual boner springing up and never acknowledged their own.

The only guy who was open about stuff like that was my buddy Chris. Most guys doing the kinds of things he did would have been called a fa**ot but he was shameless about it all and he could get away with it because of his size. He was a real nice guy too and everyone either wanted to be him or be with him. He was the guy who would swing his cock around in the showers or slap other guys with his dick “as a joke”. Although he wasn’t the only well-endowed guy he was probably the biggest and some of the guys used to call him Donkey, which he loved. I remember one time he tried to goad one of the other hung guys in the shower into a measuring contest to see who was bigger hard but the other guy wouldn’t do it.

As you can imagine everyone on campus knew Chris had a big dick and it wasn’t just because of the bulge in his singlet.

Whenever there was a party you could count on Chris to get drunk, get naked and run across campus. It was before cellphones and cameras everywhere but if they’d existed back then there would probably be thousands of photos of his dick out there on the Internet today. I know of at least one time when we were at a party and he was totally naked for most of the night and one guy was taking photos. So there probably is at least one photo out there somewhere on a random blog, probably with Chris semi hard, a couple of blushing girls around him and words like “Champ” and “Donkey” drunkenly scribbled on his chest.

I never saw him get hard in competition (a few guys did and while most never said anything about it there were a couple of mortifying incidents where guys were relentlessly ridiculed) but he always got a boner when we were practicing. Being quite good we could get some time on the mat whenever we liked so a few times a week we would go and just practice together. Sometimes there would be a girlfriend hanging around or one of our other buddies killing some time but most days it was just me and Chris.

I don’t know how many times I felt his boner rubbing against me before we eventually jacked off together but it was probably a lot. Even though I was considered a jock and not at all the nerdy type I was still real shy and never wanted to say anything about it even though I would often get hard too. He must have known.

Eventually things reached a head (so to speak) when Chris turned his dick slapping attention on me. We’d been practicing and went to the showers and we were both rock hard. We were talking about girls and I was just trying to ignore our boners but then he slapped my thigh with his dick. I tried to slap him back with mine and missed (mine is 6.5, his was about 8.5 hard).

It just progressed rapidly from there. We had a little tussle and he grabbed my cock and gave it some strokes and I grabbed his. We were both laughing and shoving each other, grabbing each other by the dick. He shoved me a bit too hard and I slipped and fell on my ass. When he reached out and pulled me up our cocks met and that’s how the proper frotting started. He put our dicks together and started stroking both of us. We were still talking about girls of course, probably just to make it all seem less “fa**oty” than everyone would consider it to be.

After that things got a bit awkward and we avoided each other for a week or two, but then one day he just walked up to me at lunch and asked if I wanted to practice that night. We met up in the evening and the first thing he said was that it was all just some good fun between buddies and no big deal.

It wasn’t a big deal after that. Every time we practiced it was mostly just an excuse to get our cocks out after and jack each other off. A few times a week we would go and practice and always finish with a good load. We were caught once by the janitor and we didn’t know he’d been watching until we walked out and caught him shoving his dick back in his coveralls

I haven’t met up with Chris for twenty years. We’re friends on Facebook and we call each other at important times to say hi and reminisce about things and even though we always say we’ll have to get together some time we never seem to manage it.

I’m divorced now and he’s married with three grown sons, all of them were wrestlers too and I sometimes wonder if any of them inherited their dad’s love of bating with their buddies.

Enjoyed this post? Please leave a comment below and say thanks to reader AJ for sharing his experience. Join our NEWSLETTER for weekly updates, and why not send us your own experiences of bating with buddies, your fantasies, or just your opinions on male sexuality? Visit the CONTACT page to share your own story. 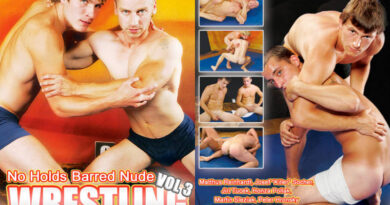 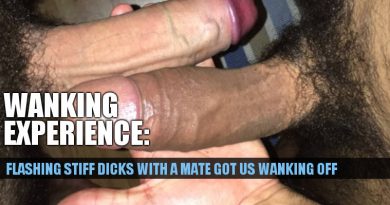 Wanked with a mate last month for the first time 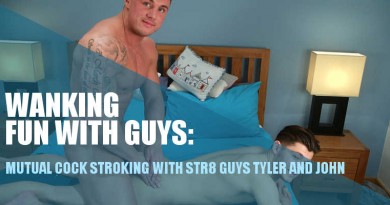